The number of companies in deep financial difficulty has risen at the fastest rate in more than seven years, triggering warnings that ‘the barrage of zombie businesses could be about to burst’ as government Covid-19 support will end this summer.

Nearly 100,000 more companies were found to be significantly distressed in the first three months of the year compared to the previous quarter, despite the ban on liquidation petitions related to Covid-related debt.

More than 720,000 businesses are now in deep financial trouble, according to data from insolvency firm Begbies Traynor, which said the 15% rise from the previous quarter was the biggest increase since research began in 2014.

Begbies Traynor found that companies in financial difficulty spanned all 22 sectors analyzed by its research, highlighting a wide and deteriorating financial situation as the UK begins to emerge from economic lockdown.

It defines significant distress as companies against which minor county court judgments have been issued or which are experiencing sustained or marked deterioration in key financial ratios and indicators such as working capital, earnings and net worth.

Bankers and insolvency practitioners are warning the UK faces widespread business bankruptcies as the government ends its Covid-19 support schemes. The first cliff edge is expected at the end of June when landlords will be able to demand reimbursement of more than a year’s rent from struggling tenants.

Business leaders are warning that some retailers and restaurants that have yet to see a significant improvement in trading could be forced to return keys to properties unless landlords allow them flexibility on refunds.

The furlough scheme, which has helped keep employed staff and businesses going, will end in the fall, bringing new financial demands on businesses.

Many have barely been able to stay afloat on government support, and will struggle to invest or grow given the likelihood of post-pandemic debt, leading to the term “zombie” businesses. The government has halted its Covid-19 loan scheme, with banks now charging interest on loans made around this time last year.

“The zombie corporate dam may be about to break,” said Julie Palmer, partner at Begbies Traynor. “The unmanageable debt levels and resulting excessive transactions will likely be the hidden icebergs waiting to sink even the most high-profile companies.” 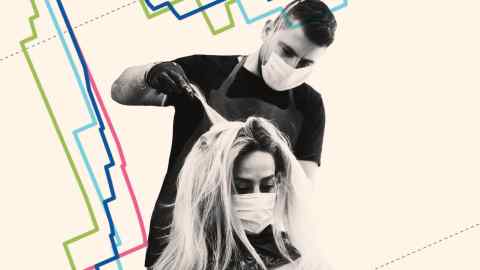 The transport and logistics sector was one of the hardest hit in the first three months of the year, with nearly a quarter of additional businesses in serious financial trouble as trade difficulties caused by Brexit hit small operators.

Regionally, London has been one of the hardest hit due to more leisure and hospitality businesses being forced to close due to the pandemic.

Ric Traynor, Executive Chairman of Begbies Traynor, said: “Despite the unprecedented central government support offered to UK businesses, it is now clear that many businesses are struggling under the weight of increased debt combined with weak revenue streams. .”

Chinese economy: financial difficulties of local governments increase the risk of payment default and weigh on the average Chinese