Cannabis has been declared an “essential activity”. Tesla, not so much.

As the COVID-19 coronavirus sweeps the country, most states are now issuing shelter-in-place orders, essentially banning residents from venturing outdoors and congregating in public places. In the LA country, even hiking trails and beaches have been closed despite being open outdoor venues.

However, some businesses deemed “essential” are allowed to operate, but with strict social distancing protocols. The definition of an essential business is business, “as necessary for the health and safety of individuals and their families”. These “essential businesses” include things like grocery stores, pharmacies, banks, hardware stores, pet supply stores, and gas stations.

And in these difficult times, you can add cannabis to the list. But electric vehicles? Not really.

At the start of the crisis, the cities of San Francisco and Denver had indeed planned to close dispensaries in the name of public health. Much like the rush for toilet paper, consumers lined the block in front of dispensaries to stock up on cannabis as they prepared to go into hiding for one to two months. However, after voter outcry, the authorities in these cities soon realized the error of their ways and relented.

Now virtually all 33 states that have some form of legalized cannabis kept their licensed dispensaries open for business. Of course, all stores still have to follow CDC social distancing regulations, and many are now ramping up delivery services.

The cannabis industry is also playing its part in helping the economy, hiring laid-off workers from other industries to meet increased demand, especially for delivery orders. Just as the repeal of Prohibition in 1933 re-legalized a big business in demand during the Great Depression, it’s entirely possible that the cannabis industry, like the grocery and e-commerce industries, could make its part in alleviating the employment crisis resulting from this economic downturn.

Along the same lines, liquor stores have also been deemed “essential businesses” by most states.

Obviously, the abuse of alcohol or cannabis is not encouraged; Smoking cannabis isn’t exactly good for the lungs, and consuming a lot of alcohol doesn’t really make the body more resistant to disease. However, it seems governments believe they can be essential medicine – or at least welcome distractions – from the current predicament that much of the world finds itself in.

But Tesla is on the short end of the stick

While it may sound ironic, even though cannabis has been granted essential status amid the coronavirus, You’re here (TSLA 2.46% ) was ordered to effectively shut down its factories in Fremont, Calif., by order of Alameda County. The Fremont factory is the epicenter of Tesla’s business, where it manufactures most of its Model 3s, Xs and Ss and has also started production of the next Model Y. Yet on Tuesday, March 17, authorities in the county decreed that Tesla perform only a minimum of basic operations such as payroll and maintenance of Tesla’s existing infrastructure. 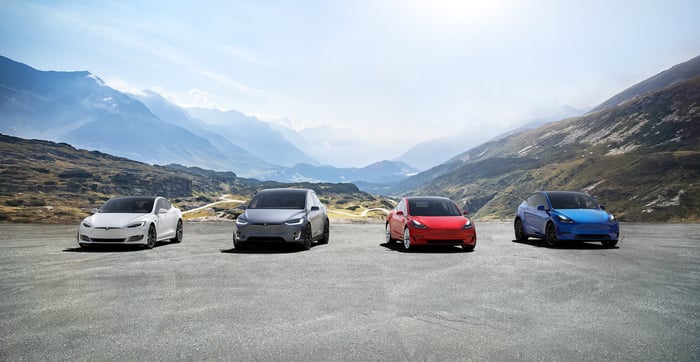 It probably didn’t go down well with Elon Musk, who had been active on Twitter ( TWTR 0.80% ) vocally dismissing the danger and seriousness of COVID-19. In fact, on Friday, March 13, just days before the shutdown order, Musk told employees of SpaceX, his other company, that, “comparatively, the risk of death from C19 is *significantly* less than the risk of death from driving your car home. … There are about 36,000 automobile deaths per year, compared to 36 so far this year for C19.” Since then, deaths in the United States have soared to 2,384 in the space of just two weeks.

Tesla didn’t initially comment on the shutdown order, but two days later issued a press release on March 19, giving the impression that the shutdown was its own idea all along.

Despite all known health precautions, the continuation of operations in some locations has posed challenges for our employees, their families and our suppliers. As such, we have decided to temporarily suspend production at our Fremont plant, effective the end of the day on March 23, which will allow for an orderly shutdown. Core operations will continue to support our vehicle and energy services operations and charging infrastructure, in accordance with directives from local, state and federal authorities. Our New York facility will also temporarily suspend production, except for parts and supplies needed for critical service, infrastructure and supply chains. Operations of our other facilities will continue, including Nevada and our service and boost network.

Although Musk and Tesla botched the initial response to the outbreak, to his credit the company has since pivoted to help the cause by turning its New York factory, which is used to make solar panels, into production of much-needed ventilators. for overwhelmed hospitals. . Musk himself also bought ventilators from China and donated them to stressed hospitals in New York.

How the shutdown could hurt Tesla’s finances

The plant closure has the potential to wreak havoc on Tesla’s near-term financial results. Vehicle manufacturing is a high fixed-cost business, and Tesla had just turned profitable over the past year, fueling its recent inventory run-up. Investors can kiss those profits goodbye for the foreseeable future, and it remains to be seen how much cash the company will burn for the duration of the shutdown.

One thing Tesla has going for it is that it recently bolstered its balance sheet with a capital increase of 2.3 billion dollars at $767.29 per share in mid-February — a move that looks pretty bright right now, as Tesla’s stock price has fallen to around $514 per share at the time of this writing, although it fell much lower before a recent rebound.

This $2.3 billion increase is in addition to approximately $6.3 billion in cash that Tesla had on the balance sheet as of December 31, 2019. However, Tesla also has significant debt, with $13.4 billion in debt. long and short term and finance leases. . According to Press releaseTesla also has about $3 billion available on its revolving credit facility, which could increase its liquidity to about $12.6 billion if needed.

Clearly, cannabis and electric vehicles are very different businesses, although both have seen rising revenues and a lot of investor attention, as they are seen as the hot new industries for the next 10-20 years. . Yet, due to the coronavirus, one industry – cannabis – looks set to receive a much-needed surge in demand, as it appears the recent momentum of electric vehicles has hit a snag.

If gasoline prices remain at their current extremely low levels for the foreseeable future, it could be even more difficult for the electric vehicle industry to take off and achieve cost parity with internal combustion cars. However, it is also possible that concerns about climate change will overwhelm even low oil prices in the future.

And despite the increase in demand for cannabis, it is still a very difficult industry from an investment point of view. Many companies have become overwhelmed in the race to expand globally, only to find themselves over-leveraged, with falling cannabis prices, insufficient retail infrastructure and a still healthy black market.

Therefore, even though cannabis stocks saw a sharp rise last week from near-bankruptcy prices, as they were deemed “essential”, they remain difficult investments until the industry has a much needed turnaround. Meanwhile, Tesla’s stock still isn’t cheap, but if it continues to fall due to the crisis, it could open up an opportunity for long-term investors, should manufacturing resume within a quarter. or two. Still, until Tesla has a lower share price and more clarity on how long the shutdown will last, I’d be cautious about its stock.

This article represents the opinion of the author, who may disagree with the “official” recommendation position of a high-end advice service Motley Fool. We are heterogeneous! Challenging an investing thesis — even one of our own — helps us all think critically about investing and make decisions that help us become smarter, happier, and wealthier.

How Do You Safely Tap Into the Equity of Your Home in an Emergency Financial Situation & How to Get Approved for a Home Loan?

Here are the tips officials are sharing for Consumer Protection Week

The 5 main advantages of taking out a loan online